A quote from the Old Testament:

Ezekiel 1:4 “…And I looked and behold a whirlwind came out of the north, a great cloud, and a fire infolding itself, and a brightness was about it, and out of the midst thereof as the colour of amber, out of the midst of the fire.”

Ezekiel 1:6-18 “…their appearance and their work was as it were a wheel in the middle of a wheel…and their rings were full of eyes round about them…”

The 4 FACES described by Ezekiel:

Ezekiel’s vision of a UFO was the Zodiac Wheel, originating with the Light Beam shown above.

The 4 Cardinal Points of the Zodiac; the Ox/Bull, the Scorpion, sometimes symbolized as an Eagle, the Water Bearer/Man, and the Lion, are the faces of the UFO described by Ezekiel. Judaism and the Old Testament, as well as Christianity and the New Testament, where the faces are described in the Book of Revelation 4:6-7, are books of astrology and numerology, that the faithful are manipulated into believing is worship of the True Living God, of which there is no such thing. Astrology and numerology are concepts based on mathematics and geometry, which is the Thought Process. The Thought Process, in turn was introduced into the world through the Arab World, and this Sacred Geometry is worshipped as the One True God in Islam, under the name of ALLAH’s, or ALL EYES.

Revelation 4:6-7 – “And before the throne there was a sea of glass like unto crystal and in the midst of the throne, and round about the throne, were four beasts full of eyes before and behind. And the first best was like a LION, and the second beast like a CALF, and the third beast had a face as a MAN, and the fourth beast was like a flying EAGLE“.

The biblical references to EZEKIEL’S UFO, with 4 FACES of an OX/BULL, a SCORPION/or EAGLE, a WATER BEARER/or MAN, and the LION, all relate to the 4 Fixed Points of the Zodiac. The OX/BULL is TAURUS. The SCORPION/EAGLE is SCORPIO. The WATER BEARER MAN is AQUARIUS. The LION is LEO.This symbolism is recorded in Ezekiel and in Revelation. Thereby signifying the true nature of the Judeau/Christian religion, as that of astrology.

Taking this symbolism one step further, the NATIONAL MALL in Washington D.C. forms a cross, as shown on p.25. This cross is formed by the vertical line from the White House, extending straight south to the Washington Monument in the centre of the Mall, and then extending further south to the Jefferson Memorial in the Tidal Basin. The horizontal line of the cross is formed by joining the Capitol Building to the east, with the Lincoln Memorial to the west, which passes, once again, through the Washington Monument. This is once again, a symbol of the Zodiac Wheel chart, with the 4 Fixed Points of the Zodiac being expressed in the National Mall.

The face of the WATER BEARER MAN of the Zodiac, relates to Washington D.C. and the Capitol Building, and corresponds to President GEORGE WASHINGTON.
The face of the OX/BULL coincides with the location of the White House, and corresponds to President THEODORE ROOSEVELT, who broke away from the Republican party and started the BULL MOOSE PARTY, and who referred to himself as being “Strong As A Bull”. 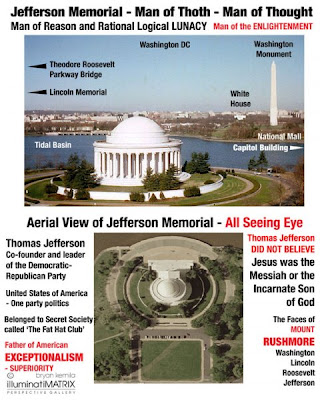 The face of the SCORPION or EAGLE, coincides with that of the JEFFERSON MEMORIAL, and to President THOMAS JEFFERSON. Thomas Jefferson was the author of AMERICAN EXCEPTIONALISM, in the same fashion as Hitler was the author of the supreme race. The EAGLE is a symbol of superiority, where symbolically, nothing flies higher than the eagle. The EAGLE was also the symbol of Nazi Germany under Hitler. The symbolism of the SCORPION is realized with the understanding that it exists only south of the 49th parallel North. The 49th parallel corresponds to the border of Canada and the United States, including Manitoba, Saskatchewan, Alberta, and British Columbia. On the American side of the border, this includes the 11 Midwest States, and the 11 Western States, for a total of 22 States. The Scorpion can only be found from the 49th parallel south. The State of Arizona, has as its capital city, PHOENIX, which in turn, is symbolic of the PHOENIX BIRD, which also relates to the EAGLE, that rises from the ashes as the New World comes into being.

The face of the LION corresponds to the LINCOLN MEMORIAL, and to President ABRAHAM LINCOLN. 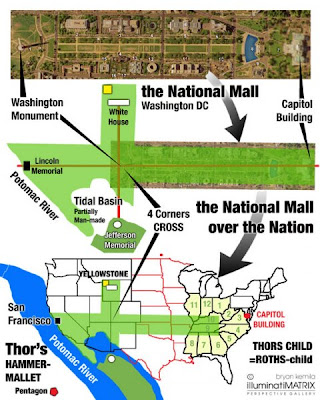 Again, when the Washington Mall is laid over the USA as a whole, the White House corresponds to the 44th state to join the Union, which is Wyoming. WYOMING=WHY HOMING=WHITE HOUSE. This coincides with Yellowstone National Park located at 44 degrees North. Wyoming is located in the heart of ranch country, and the wild west. This corresponds to the Ox/Bull, and the Taurus sign of the Zodiac.

When performing the same overlay with the Washington Mall, the Jefferson Memorial coincides with the southern most tip of the Cross, and is located just inside the Mexican border, and exactly where the city of Jaurez Mexico is situated. This is also the site, where the current Mexican Drug Wars are now unfolding, and just to the west, the State of Arizona, with its new immigration laws, and the symbolic city of Phoenix are extending the subliminal relating to a New World rising from the ashes. This corresponds to the Scorpion/Eagle, and the Scorpio sign of the Zodiac.

The 4th Zodiac sign of Leo, relates to the Lincoln Memorial, which corresponds to the location of San Francisco, when the National Mall is overlayed on the USA as a nation. The Lincoln Memorial is located to the west of the REFLECTING POOL, which is located from the Washington Monument up to the Potomac River and the location of the Lincoln Memorial. This corresponds to the location of San Francisco and the Golden Gate Bridge, where the subliminal has been established for thousands of years, that the Messiah will come through the Golden Gate to cleanse the earth of sin and sinners. This in turn relates to the Sacramento Valley, and the suggestion of the SACRAMENTS of the BODY and BLOOD of CHRIST.

26th President – THEODORE ROOSEVELT = THEO or GOD – DORE or DOOR = The DOOR to GOD, the SACRIFICE – ‘No man comes unto the father but by ME/Jesus/the Sacrifice/the OX/BULL = TAURUS 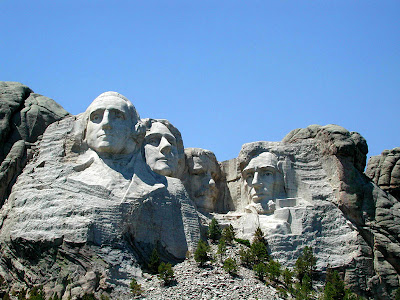 These 4 Presidents are also carved into Mount Rushmore, which is located at 44 degrees North. Corresponding to Yellowstone Park at 44 degrees North and to Wyoming the 44th State. Mount Rushmore is another symbol of the 4 fixed signs of the Zodiac, and the name suggests that something will be RUSHING MORE. The word MORE = MARE = the SEA, and Mother MARY.
Posted by Unknown at 3:51 AM