The President and the Press: Address before the American Newspaper Publishers Association 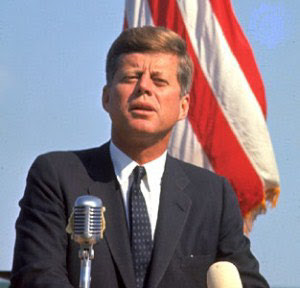 I do believe that this is one of our few real Presidents of the USA that actually was acting in the Interest of the PEOPLE & unfortunately died for it. The following speech shows how much he new about the "Illuminati" our so called "Loving fucking Protectors" that do nothing but, poison us, steal our rights & freedoms, steal our money & identity, enslave us by brainwashing & ultimately...killing us just for the fun of it. Do I need to say more.


The President and the Press: Address before the American Newspaper Publishers Association

"I want to talk about our common responsibilities in the face of a common danger. The events of recent weeks may have helped to illuminate that challenge for some; but the dimensions of its threat have loomed large on the horizon for many years. Whatever our hopes may be for the future--for reducing this threat or living with it--there is no escaping either the gravity or the totality of its challenge to our survival and to our security--a challenge that confronts us in unaccustomed ways in every sphere of human activity.

This deadly challenge imposes upon our society two requirements of direct concern both to the press and to the President--two requirements that may seem almost contradictory in tone, but which must be reconciled and fulfilled if we are to meet this national peril. I refer, first, to the need for a far greater public information; and, second, to the need for far greater official secrecy.

The very word "secrecy" is repugnant in a free and open society; and we are as a people inherently and historically opposed to secret societies, to secret oaths and to secret proceedings. We decided long ago that the dangers of excessive and unwarranted concealment of pertinent facts far outweighed the dangers which are cited to justify it. Even today, there is little value in opposing the threat of a closed society by imitating its arbitrary restrictions. Even today, there is little value in insuring the survival of our nation if our traditions do not survive with it. And there is very grave danger that an announced need for increased security will be seized upon by those anxious to expand its meaning to the very limits of official censorship and concealment. That I do not intend to permit to the extent that it is in my control. And no official of my Administration, whether his rank is high or low, civilian or military, should interpret my words here tonight as an excuse to censor the news, to stifle dissent, to cover up our mistakes or to withhold from the press and the public the facts they deserve to know.”

“Today no war has been declared--and however fierce the struggle may be, it may never be declared in the traditional fashion. Our way of life is under attack. Those who make themselves our enemy are advancing around the globe. The survival of our friends is in danger. And yet no war has been declared, no borders have been crossed by marching troops, no missiles have been fired.”

“It requires a change in outlook, a change in tactics, a change in missions--by the government, by the people, by every businessman or labor leader, and by every newspaper. For we are opposed around the world by a monolithic and ruthless conspiracy that relies primarily on covert means for expanding its sphere of influence--on infiltration instead of invasion, on subversion instead of elections, on intimidation instead of free choice, on guerrillas by night instead of armies by day. It is a system which has conscripted vast human and material resources into the building of a tightly knit, highly efficient machine that combines military, diplomatic, intelligence, economic, scientific and political operations.
Its preparations are concealed, not published. Its mistakes are buried, not headlined. Its dissenters are silenced, not praised. No expenditure is questioned, no rumor is printed, no secret is revealed. It conducts the Cold War, in short, with a war-time discipline no democracy would ever hope or wish to match."

“Without debate, without criticism, no Administration and no country can succeed--and no republic can survive. That is why the Athenian lawmaker Solon decreed it a crime for any citizen to shrink from controversy. And that is why our press was protected by the First Amendment-- the only business in America specifically protected by the Constitution- -not primarily to amuse and entertain, not to emphasize the trivial and the sentimental, not to simply "give the public what it wants"--but to inform, to arouse, to reflect, to state our dangers and our opportunities, to indicate our crises and our choices, to lead, mold, educate and sometimes even anger public opinion.”

“It was early in the Seventeenth Century that Francis Bacon remarked on three recent inventions already transforming the world: the compass, gunpowder and the printing press. Now the links between the nations first forged by the compass have made us all citizens of the world, the hopes and threats of one becoming the hopes and threats of us all. In that one world's efforts to live together, the evolution of gunpowder to its ultimate limit has warned mankind of the terrible consequences of failure.
And so it is to the printing press--to the recorder of man's deeds, the keeper of his conscience, the courier of his news--that we look for strength and assistance, confident that with your help man will be what he was born to be: free and independent.”
Posted by Unknown at 6:31 PM