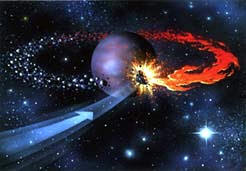 Enjoy part 2 of the presentation of "The Dar Star/Planet X Theory".
The Planet X / Nibiru flyby scenarios are worth watching.
Produced and narrated by Marshall Masters, the first part of this February 2009 video report focuses on the revised upwards estimates for a more violent solar maximum in 2012. It also demonstrates the methodical manner, in which mainstream media has begun dumbing down science coverage of these important trends.
The second half of the program presents a series of 2012 Planet X / Nibiru flyby scenarios developed by Jacco van der Worp, MSc. Based on core criteria called the electrical kill zone, it presents several Planet X / Nibiru flyby scenarios. These 2012 scenarios range from a best case scenario to a possible Extinction Level Event (E. L. E.) flyby, where up to 90% of all presently living species could perish.
http://www.youtube.com/watch?v=tf3jPtaq9Q4