Mark Kelly, astronaut, and husband of Gabrielle Giffords, was scheduled to race on 09/16/11, until the races were cancelled due to the crash of Leeward.

The World Trade Center attack involved imaginary airplanes, with imaginary PILOTS. These were the BIRDS that Romulus and Remus, the founders of ancient Rome, (on the 7 HILLS of ROME), were waiting to see.

This airshow crash is symbolic of the BIRDS that brought down the Twin Towers!

The crash occurred at the 135 degree angle of Orion, on the border of Nevada and California which coincides with the MARRIOTT HOTEL in the WTC building layout.

Within 24 hours, on September 17, a second airshow crash occurred in Martinsburg, West Virginia, and again killing the PILOT.

Martinsburg is located at 39.5 N / 77.9 W, just slightly west and north of Washington DC, and exactly the same distance North as Reno. 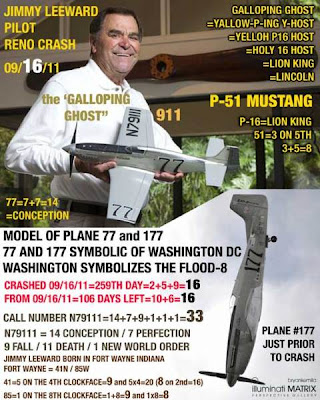 Lake Tahoe / RENO = Galilee
The chart below shows the incredible similarity between the Sea of Galilee and Lake Tahoe. Even the border in the middle of the lake and sea, are identical. It should be noted, that at this very moment, on the Sea of Galilee facing SYRIA, there’s another episode of the ARAB SPRING occurring. An extremely violent revolution, … and the country SYRIA is named after ORION’S HUNTING DOG SIRIUS! This uprising relates to the area of the 11 Western States and links to the aircrash in RENO. 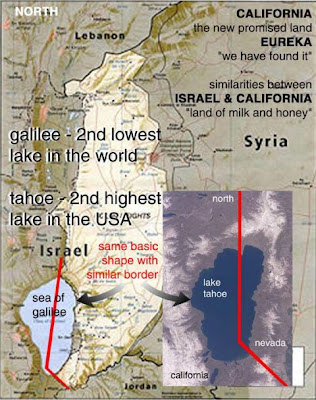 The beginning of miracles in regards to Jesus, began in CANA of GALILEE. As demonstrated on the chart below, CANA GALILEE is an extended anagram for LINCOLN, the Lion King.

The judge in regards to crucifying Jesus, or giving the order to SACRIFICE Jesus, was Pontius Pilate. This name begins with a P in both instances. The letter P is the 16th letter.

The name PILATE suggests PILOT, which suggests AIRPLANES, or BIRDS.
The word PILATE suggest PILATES, or the EXERCISE using mental and physical strength to REGENERATE. This involves SACRIFICE.

The name PILATE also suggests PLATES that were used at the Marriage Supper that Jesus attended in Galilee, where he began his MIRACULOUS ministry. These PLATES are the SEISMIC PLATES of the RING of FIRE which will be served at the Judgment Day Marriage Supper of the Lamb.

See the chart below, and the PILATE STONE that is presently in the Israel Museum which includes an inscription to Pontius Pilate. Notice that this STONE, or ROCK, is the shape of the previous Stones, or Rocks, shown throughout this site and relates to the 11 WESTERN STATES. 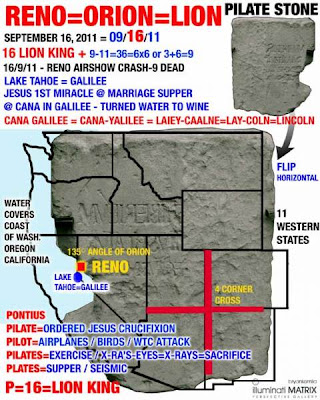