Remember Air-Frame Shock-Testing (for those that don't know what AFST is click on link) Looks like the article below falls right in-line with this type of thinking...oh Shit! It's the NEWS?

The MEDIA – MIDDLE – Go Between the Illusory God & Man!

All forms of the media, including all print, television, movie, video, recordings, internet, etc., are the ‘go between’, the communication network of the luciferian egregore group of Thinkers and the illusory body we call humanity. Even the words written here, are meant to be used to create confusion and anxiety. As much as possible, attempt to grasp the intent of information. The media systems within the 3D sphere, do not allow for straying from the principles and standards of perpetuating the direction the agenda is meant to go.

As with everything luciferian, a combination of people, events, locations, etc., draws the most complete picture of what’s transpiring in this 3D illusory world. Ben Bernanke, Chairman of the Federal Reserve, was voted Person of the Year by the media giant, Time Magazine.

Congratulations Ben Bernanke! (Robber Baron Of The Year)
Dear Chairman, Congratulations on Time’s Top Tick of your career. With a 79% disapproval rating, you are now one of the least deserving Men of the Year. 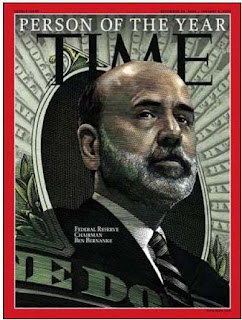 WTF? Man of the Year...yeah...just what we need, let's reward the scum! This is so DUMB, it doesn't even need a comment. The picture above says it all!


A brief look at some interesting characteristics found within the names of some of the media outlets, affords a peak into the Mindset that drives these systems.

Used by the world Elite & the opposition to the Elite as a Duality tool. 2 sides of the same coin.

An alliteration of the letter W.

The letter W coincides with the V, or VA, or WA, in Hebrew, with a value of 6.

Government Power Over the Internet.

Salon.com has published new details about a top secret government database that might be at the heart of the Bush administration's domestic spying operations. The database is known as "Main Core." It reportedly collects and stores vast amounts of personal and financial data about millions of Americans. Some former US officials believe that "Main Core" may have been used by the National Security Agency to determine who to spy on in the immediate aftermath of 9/11. We speak with Tim Shorrock. Tim Shorrock, author of the article on Salon.com, "Exposing Bush's Historic Abuse of Power." He is an investigative reporter and author. His latest book is titled Spies for Hire: The Secret World of Intelligence Outsourcing.
Main Core, ... the expansion of an old
Federal Emergency Management Agency (FEMA) database containing the names of American citizens who would be rounded up and incarcerated in the event of a national emergency declaration.

After 9/11, the Bush White House used FEMA's secret and illegal database of American citizens, code-named Main Core, to target American citizens with electronic and other surveillance. FEMA's database had increased in size with the addition of raw telecommunications intercept data on American citizens obtained from the National Security Agency (NSA).

Main Core has its roots in a smaller database developed by FEMA during the Reagan administration.

FEMA, then runby one of Ronald Reagan's cronies from California, former California National Guard commander Gen. Louis Giuffrida, managed to obtain from the FBI a list of some 12,000 names contained in the FBI's domestic intelligence files. When FBI Director William Webster learned that Giuffrida had used the list as a basis to create a database of 100,000 American citizens who were considered threats to national security, he demanded that Giuffrida return the list and all copies to the FBI. The list contained the names of individuals opposed to U.S. policies in Central America, tax protesters, and people known as survivalists and more.

However, FEMA did not return all of the copies of its lists to the FBI. In the 1980s, White House official Oliver North, working with FEMA, developed a "continuity of government" contingency plan called REX-84, or "Readiness Exercise 1984," that would have instituted plans to round up and intern hundreds of thousands of American citizens in the event martial law was declared. Then-Attorney General William French Smith formally protested the existence of the North-Giuffrida plan to National Security Adviser Robert McFarlane.

It was this renewed program to round up Americans that was at the heart of the March 10, 2004 confrontation between White House Counsel Alberto Gonzales and Chief of Staff Andrew Card on one side and Deputy Attorney General James Comey on the other in Attorney General John Ashcroft's hospital room. Ashcroft and Comey refused to sign off on the Bush plans for maintaining a database of Americans considered subversive.

A Texas Observer article dated May 15, 1987 by Louis Dubose, which provides greater details on the early FEMA database. Then House Banking Committee Chairman Henry Gonzales discovered that the FBI list turned over to FEMA was the Administrative Index (ADEX), a list of 12,000 of dossiers on American citizens. Gonzales charged the list was to be used by FEMA to detain Americans considered to be a threat to national security. Gonzalez also said the list should have never been turned over to FEMA.

FEMA also had plans to round up and detain 400,000 Central Americans
in the United States, in addition to a number of Arab-Americans.
Ironically, the FEMA plan, called the "Alien Terrorists and Undesirables
Contingency Plan.

Goverment Internet Surveillance in Room 641A...
In 2006 Mark Klein, a technician for AT&T revealed the existence of a secret internet monitoring room called 641A. The NSA siphoned off all Internet traffic which flowed through this part of the internet backbone. www.anonymous-proxies.org

FOX News Investigative Reporters Fired For Telling The Truth!!!
http://www.1-free-dvd.com/ This is only one of the thousands of stories our TV News Stations have tried to cover up. What the public needs to understand is that FOX, ABC, CBS, CNN, MSNBC & the other established *mainstream "mass media"/news sources are perpetrating criminal fraud (via omissions, distortions and outright lies) and a deliberate censorship of facts.

This illegal censorship is not only harming Americans because they wield the power to control the outcome of elections via the quantity and quality of the news coverage they provide the candidates; it constitutes an anti-American criminal enterprise; not to fail to mention a violation of the first amendment/freedom of the press.

This has been posted before...but if you didn't here it...please listen. It's certainly worth a listen again to. I don't get tired of this SPEECH. This is one of the greatest SPEECHES you will ever hear.
JFK SPEECH ON SECRET SOCIETIES AND FREEDOM OF THE PRESS!!!